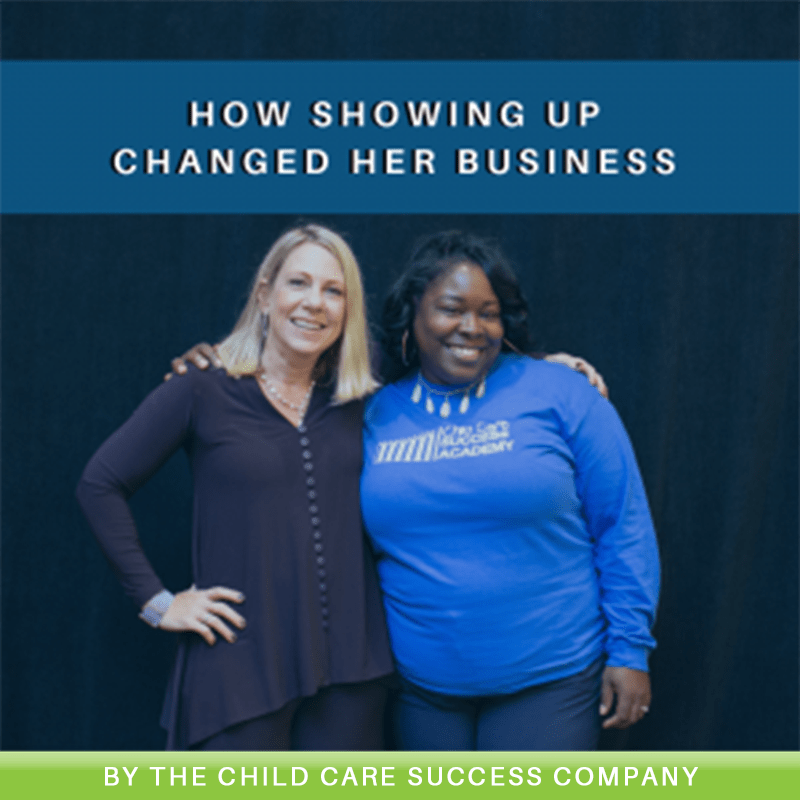 A few months ago something happened with one of our Child Care Success Academy™ members that caught my attention, and I want to share that story with you.

You see, Mallorie Malloy-Coe is a serious child care business owner. She is working on growing her center and making a positive difference in her community! She’s a mom, she’s an employer, she’s in the midst of moving her entire school to a new building. She’s had a lot going on.

So, it wasn’t that unusual when “life happened” and it didn’t look like Mallorie would be able to attend the Academy Mastermind Meeting in Florida last January.

What WAS unusual, and what caught my attention, was the way her fellow academy members rallied behind her when they learned that she wouldn’t be able to attend.

They knew how important it was – how life-changing it could be – if Mallorie would just SHOW UP to that meeting.

Mallorie said that she was surprised that she got about 20 comments, inboxes, or texts from fellow academy members who helped her problem solve, get creative, and find a way to get there. 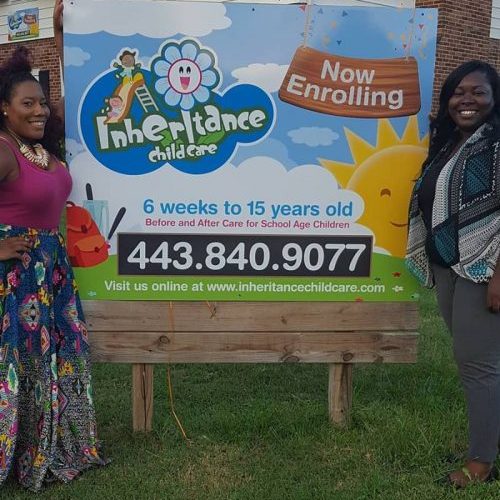 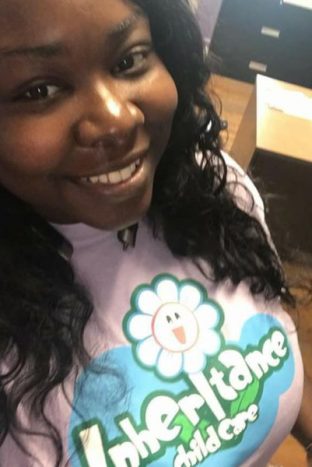 And with all of that support and encouragement, she DID end up finding a way to get there – even last minute.

And because she simply showed up she was able to experience a valuable, inspiring, idea generating mastermind meeting that has helped her to move her business forward.

I interviewed Mallorie shortly after this experience because witnessing the way all of these members rallied behind her at a weak moment and helped her stay on track – the way they helped her NOT miss out on a blessing – inspired me.

I wonder if YOU might also miss out on opportunities, ideas, solutions….for the simple reason that you never showed up. Think about it.

So, Mallorie and I had a little chat. She was kind enough to share her story, and our conversation went like this…

When did you first come across Kris Murray and what prompted you to learn more about her and get involved with Kris?

I first found out about Kris Murray a LOOOONNNNG time ago, definitely before 2015. I believe I found her on Facebook or browsing the internet. I decided to reach out to Kris Murray because I wanted to have a better bank of resources that would help me in my business. There are lots of resources out there, but I felt like I was advancing to a different level of what my company’s needs were and I needed more advanced stuff. My company was growing and had a higher level of need. From what I could see, Kris Murray and the services she was offering would definitely have the resources I was looking for.

When did you join the Child Care Success Academy™ and why did you think it was for you? What about it resonated with you or spoke to you and said: “Hey I need to be a part of this”?

I joined the Child Care Success Academy™ at the Summit of 2017. I knew I needed to be part of the CCSA because it seemed like every area that I was struggling with and trying to deal with on my own was being spoken about at the summit and it was really easy to identify that this was the group for me because it seemed like the academy would have the answers to all of my problems.

So you‘ve been in the academy for a couple of years. What have you learned since joining, what results have you experienced?

I’ve learned a lot. When you first join it’s easy to feel like you know the least amount of anyone in the room, and I quickly found out that’s not true. Not only have I gotten help and ideas from other members, but I’ve learned that I have a lot of insight that I can offer to other members. I have become more aware of opportunities that are out there. I feel empowered by the academy in a lot of different ways. I’ve definitely learned a lot in terms of how to put my systems in place, how to have effective meetings….doing things that WORK instead of just doing things just to do them, or typing policies and documents just to type them. I actually have workable systems now and that’s something that I am proud of. I now feel like I can actually get stuff done, and then move on to the next. I actually feel like I am an Empire member, just waiting to “get there.”

We started with one small location in 2010, but we had a lot of demand so I have just been adding locations. At one time we had 5 small locations. Right now we have 3 small locations with a combined capacity of 103. We are in the process of closing on a new property that would allow us to consolidate all 3 locations into one space. I am really excited about that. Even though that’s a huge goal and I am really excited about that, I know that I won’t stop there because I am already ready for the next big thing. I know it will take some time in our new building to make sure my systems are in place and everything is running smoothly. However, I am ready to start saving and planning for what’s to come after that.

This past January, we had our quarterly mastermind meeting planned for Clearwater, Florida – and you were going to go, but some things were going on that caused you to second guess that. So tell me the story of what was going on in your business and in your life before that January meeting:

I love going to the mastermind meetings. But this past January, I wasn’t ready. I was planning on going, but then life happened. I had not planned properly for the meeting. My children didn’t have a sitter lined up, my finances weren’t 100% in order and I was worried about the expense of the trip, and I just wasn’t properly prepared when it was time to go. So I just decided I wasn’t going. It was too late.

So then you had posted in one of the Facebook groups…..

Yes, So, as you probably are aware, I post a lot in our member’s Facebook group, lots of personal, and fun and business stuff. I interact with our members often. So when I saw a lot of other academy members posting about being excited for the trip, and their travel progress, I was feeling bummed that I wasn’t going. And I was just randomly being me, and I had posted a little “pout” to let everyone know I wasn’t going to this one and I’d miss them.

I totally was not expecting 10 or more academy members to get on my post and cheer me on and encourage me to still come to the meeting. …but when they did, it turned my whole way of thinking around. I was like “How can I NOT go? I have to figure this out!” Yeah, I had comments, inboxes, all sorts of encouragement all to tell me I needed to figure out a way to get to Florida. I had to get creative, but I got there. I even took my grandmother with me. We were just really glad that we had made the decision to go.

After the meeting, I just couldn’t imagine if I had not made it. I would have been very upset with myself. And, because of this, I have ALREADY purchased my tickets for the next mastermind meeting in San Diego in April.

Where do you think you’d be if you hadn’t gone to the meeting? Do you see any negative effect, or a positive effect because you DID go?

I think that if I hadn’t gone to the meeting, not only would I have been disappointed on what I missed out on, but I definitely would have been stuck in a place of regret for a period of time. I know this because I still regret not going to a mastermind meeting a couple of years ago where so much valuable information was given and worked on……..and now I am working on those things personally and I am a few steps behind everyone else because I missed it.

There’s a surge of electricity and motivation and inspiration that comes with attending these meetings. You leave with a degree of momentum after meeting with all of these amazing business owners and learning from the coaches and guest speakers. That momentum helps spur you along and get you some traction.

What would you say to another Academy member that maybe finds them self in this same situation – facing a decision on whether or not to attend the live mastermind meeting….for any reason, their finances are tight, there’s an issue with family, you are expecting a licensing visit, being short staffed – whatever the excuse might be – what advice would you give that member?

That’s funny. I would probably say the same thing that Donna and Joe and everyone else said to me. “Get your butt to the mastermind meetings. Get a loan, get that staff trained, it will be ok, the building will still be there when you get back. Just get there.” And as far as the money – it basically pays for itself. You won’t have any regrets. It’s a resource. It’s something that you have for being part of the academy. Use it, just get to the mastermind meetings. That’s all I can say. You don’t want to miss it.

To wrap up, how has being a part of the academy impacted your business and your life or what has been the most valuable piece?

That’s hard because there have been so many valuable pieces. It has given me a confidence that I didn’t have before, as well as taken away a lot of my anxieties as a business owner.

Freedom, I guess, would be the answer to that. I have entered a different level of freedom – personally and professionally.

My ability to network has grown, I’ve changed in that area. My anxiety around travel has decreased, and I have a confidence in my ability to lead my business, to grow my business, that I didn’t have before. My staff are feeling empowered. Financial freedom. We’ve just grown so much and are at a different level, a greater level that we’ve ever been.

The Epitome of Hustle: Don Alley